The past two days, I stayed down at Currumbin at the Rocks Resort. I was itching for a bit of a change of scenery and since it was the September holidays, we went to the beach! It’s spring here in Australia, and the weather is starting to warm up. It was a very relaxed couple of days of hanging around the beach and enjoying the weather.

The Early Bird Catches the Worm…

… and goes back to bed straight after. It isn’t very often I get to see a sunrise, as there are often trees or buildings blocking the view. I thought it was a great idea to get up early to see the sun rise over the water. It’s always beautiful seeing the sun rise and light up the sky, especially from this high up. In this case, the light was reflecting on the water and through the clouds, so everything was immersed in golden light.

A few boats head out to sea, while kayakers stick close to shore…

I was rather amused to see there were joggers and dog-walkers and boats driving around, showing no interest to what is probably an ordinary sight for them. They watch the sunrise every day, whereas for us, it was a special treat.

We went back to bed around six am, after getting up at five-thirty to watch the sunrise. After we woke up (for the second time), we headed down to the beach.

The main beach we go to is directly out the front of the Rocks Resort. It is between two large rocks, Elephant Rock and Old Woman Rock, and has Currumbin creek right around the corner, opening out to the beach. This creek offers a more protected area to swim in when the surf is rough, and there are occasional dolphin sightings as the animals enjoy swimming up and down the creek.

We spent most of our time on the beach, except for a walk along the creek, and we did what most people do at the beach. We swam, and we sat on the sand. There were a few sunburned shoulders despite the vigorous application of sunscreen.

For some reason, despite being considered adults, whenever I go to the beach we end up digging holes and building sandcastles. One time we even made a sand snowman (poor deprived Queensland kids). This time was no exception. There were holes about half a meter deep dug, for the sake of digging a hole.

We found some pretty shells and rocks, and some not-so-pretty sand worms. These worms spit out their stomach (so I’ve been told, but I’m not really sure what to call it…) to grab a mouthful of sand and pull itself forward. It turns out that getting hit by the stomach actually hurts. It’s a bit like a very tiny harpoon. We also managed to find a few eugaries (also known as pippies). It was rather amusing because as a section of the hole collapsed, you could see the eugary suspended, reaching out with its foot to find more sand like a white tongue (that’s probably a bit gross but the best description there is). It would squirt water at us when we picked it up.

The eugaries were saved for fishing purposes. There were bream and whiting in the quieter water of the beach and the creek, and we saw a few people fishing. If you are interested in that, the good spots to fish are off the rocks on either side of the beach but be careful, because it is slippery and those rocks can have sharp edges.

Take a moment to appreciate the Gold Coast Skyline…

Having a Whale of a Time

It is the time of year where you see whales migrating south. In case you weren’t aware, whales migrate from Antarctica to have their calves in warmer waters and head back around spring. Whales tend to swim past the Gold Coast between May and November, so if you want to see that, book a place by the water and keep an eye on the horizon. I tried to get some photos from the balcony, but they splashed around one second and vanished beneath the surface the next. I am sure they are humpback whales as we would see, through the binoculars, the little dorsal fins on their backs as they surfaced.

It’s incredibly hard to photograph whales from a balcony.

You can book a tour in this time to see the whales closer, but from our balcony we were seeing huge white splashes as the whales threw themselves around. No need to pay! We were even seeing them from the beach. Currumbin Beach normally has some decent surf but the past few days, the water was clear, cool and calmer than usual. This is a significant factor in the experience we had.

We could hear the whales underwater.

Can you see the little dorsal fin?

For some reason, I thought whales could only be heard on special machines. But when it is calm water, we ducked under the surface of the water and held our breath as long as we could to listen to them. It’s difficult to describe the sound the whales make. I heard it likened to the sound of a child crying, and I could understand that. For me, I thought it was a bit higher pitched but still the same ‘whaa-aaaa’ sound, and we heard short squeaking noises as well. I thought it sounded rather playful, which makes sense given how they were breeching and carrying on their antics. Maybe it is just my mind attributing the playful sound to the behaviour.

It was an incredible experience.

Use binoculars to see the whales better…

Normally when I’m on holiday, I like to explore a bit more. As we were only there for two days, it was a better idea to enjoy where we were rather than going for a drive to the hinterlands or visiting the wildlife centre nearby. I feel rather refreshed after this little break and really appreciate how lucky we were that the conditions were so perfect to hear and see the whales.

This trip would be good for anyone. The creek offers swimming suited to small children, while the beach is probably left to stronger/more confident swimmers. There are the red and yellow flags with lifeguards on duty, so it is safe for everyone. Sand entertains people for hours. And really, who doesn’t enjoy relaxing on the beach?

~***~ Have you ever heard whales underwater? Let me know about your experience if you have! ~***~ 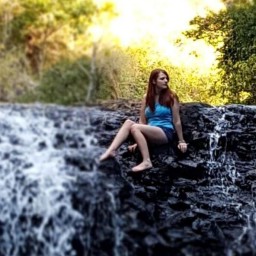